Making depth maps for a river is always problematic due to the constantly changing water levels. So what I do when I make these maps which were made over a period of several trips is to get the water level at Lock and Dam 15 just up river a bit and name the data by Location, Date, and river level. Then I can take each trip data individually and load it into Dr Depth and subtract whatever level is in the title and save it as Location, Date, Zero Gauge. I put all of these into a database which load them all and then I just adjust the data down for whatever river level I need. Most of the following maps were made in 2011 with some data added in 2012. All maps set for a river level of 5.0 ft at Lock and Dam 15 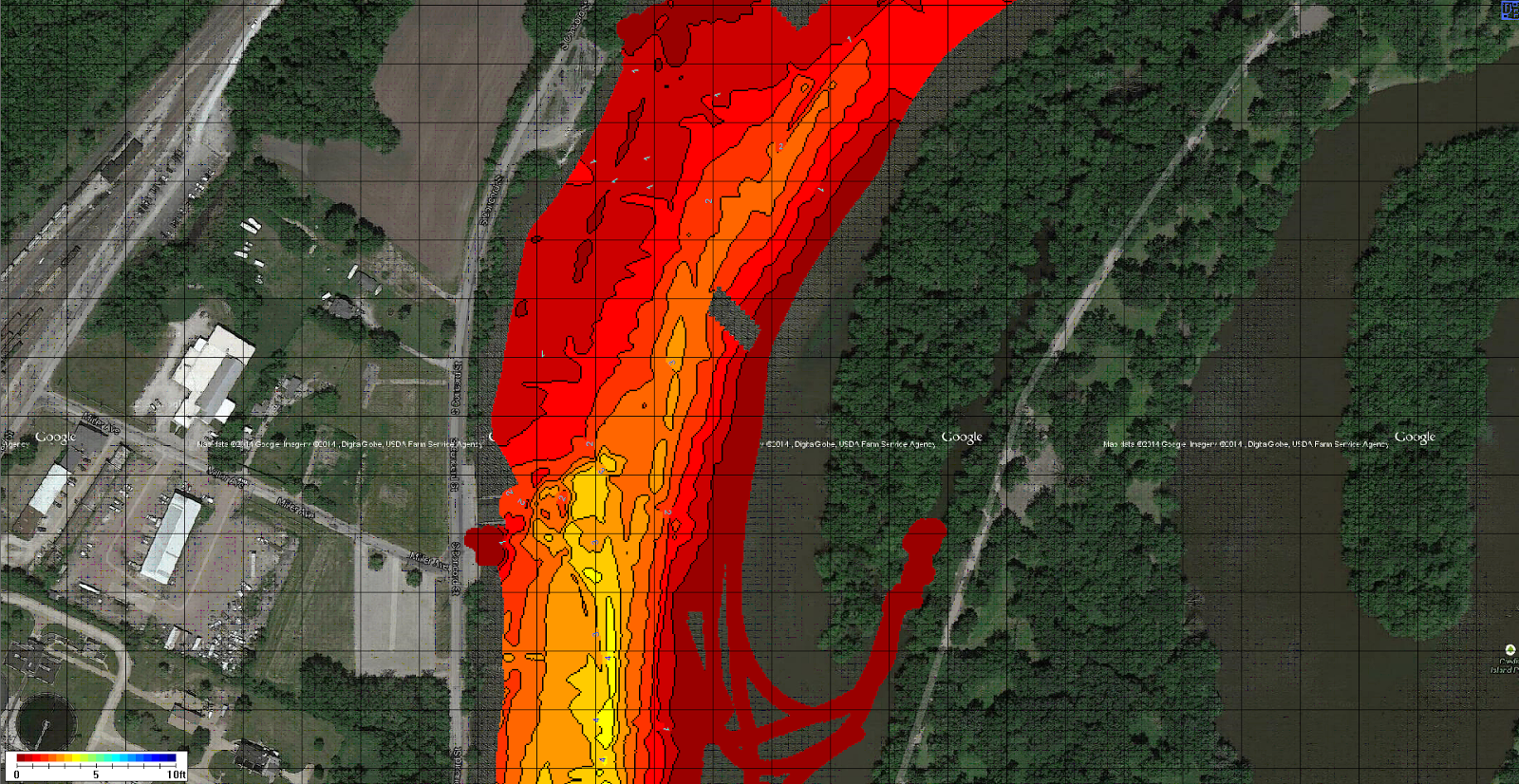 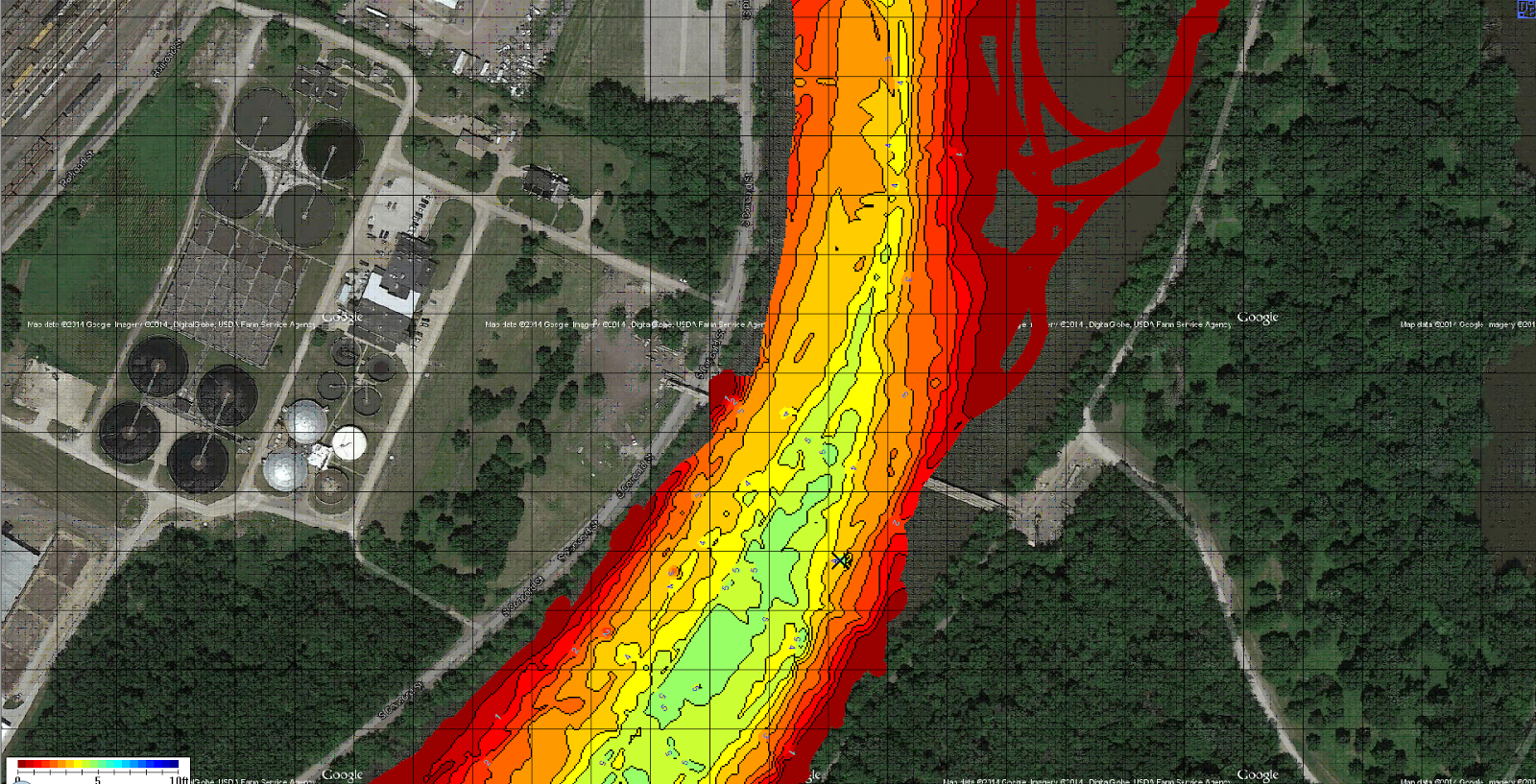 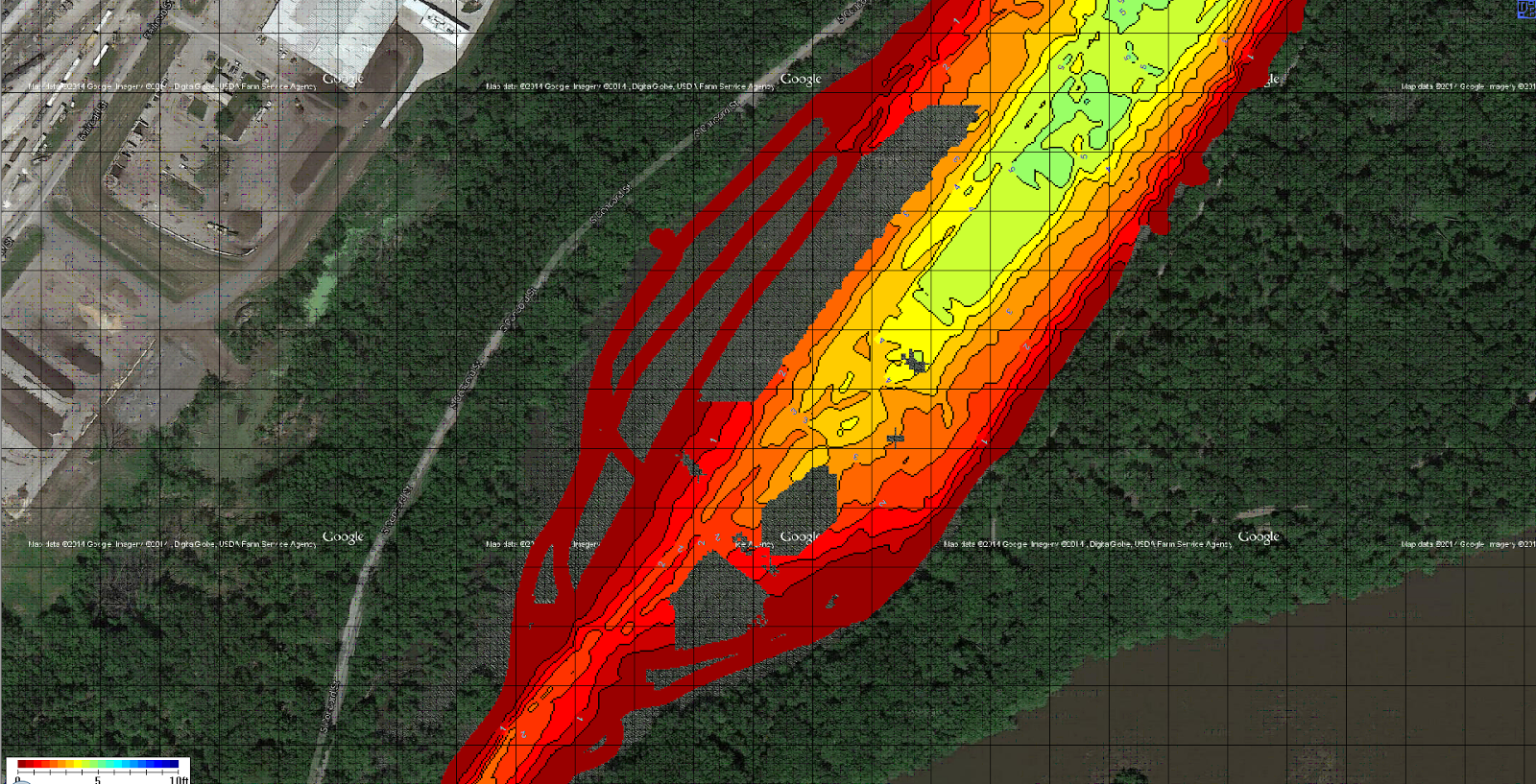 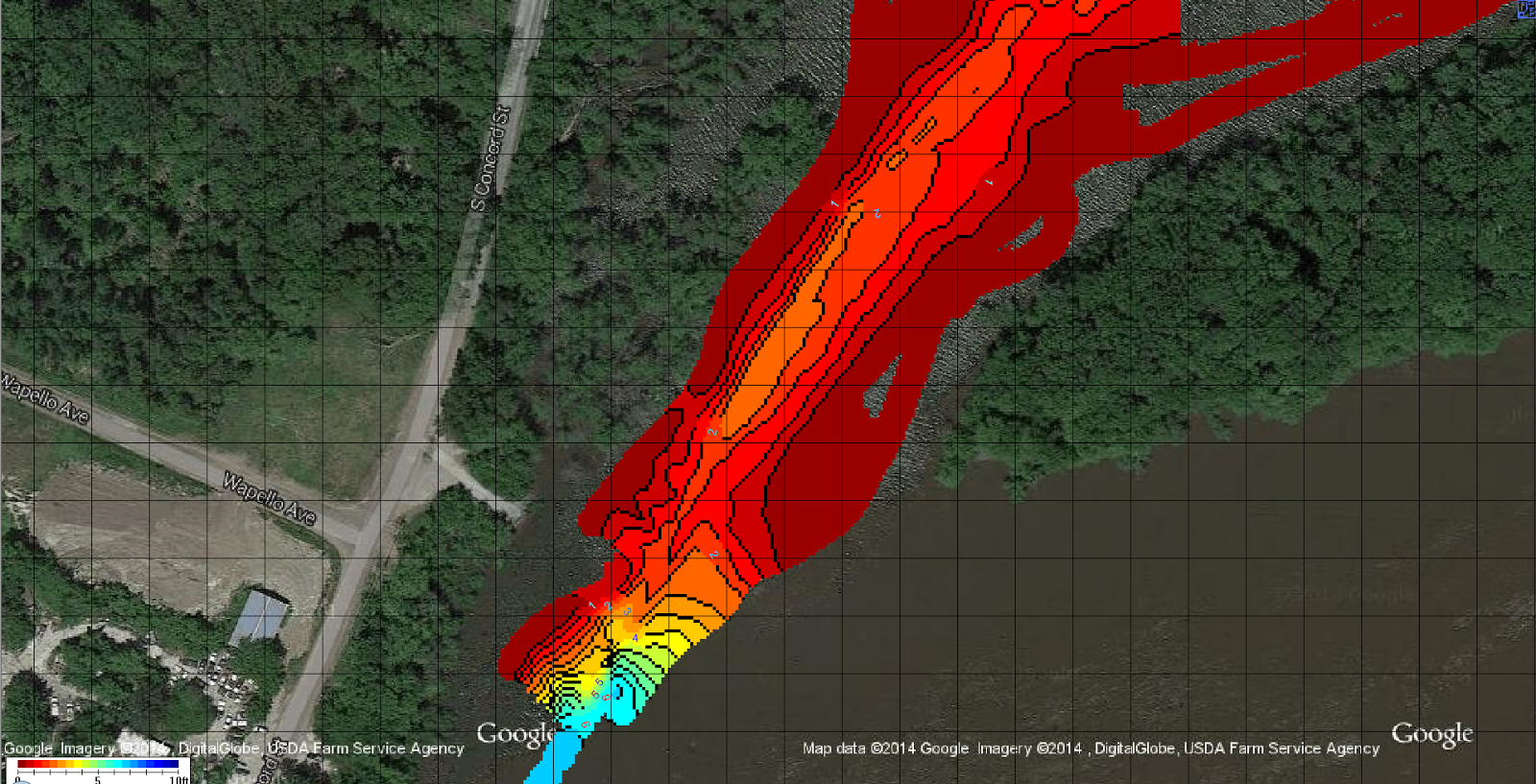 Now here is the area of the bicycle bridge from 2011 and after it was finished in Fall of 2012. It's more than obvious that it does NOT meet the standard set forth in US Army Corps of Engineers Nationwide Permit # 14 which CLEARLY and UNEQUIVOCALLY states that:

So much for 21st Century Yuppies and their "Feel Good" environmental projects .... 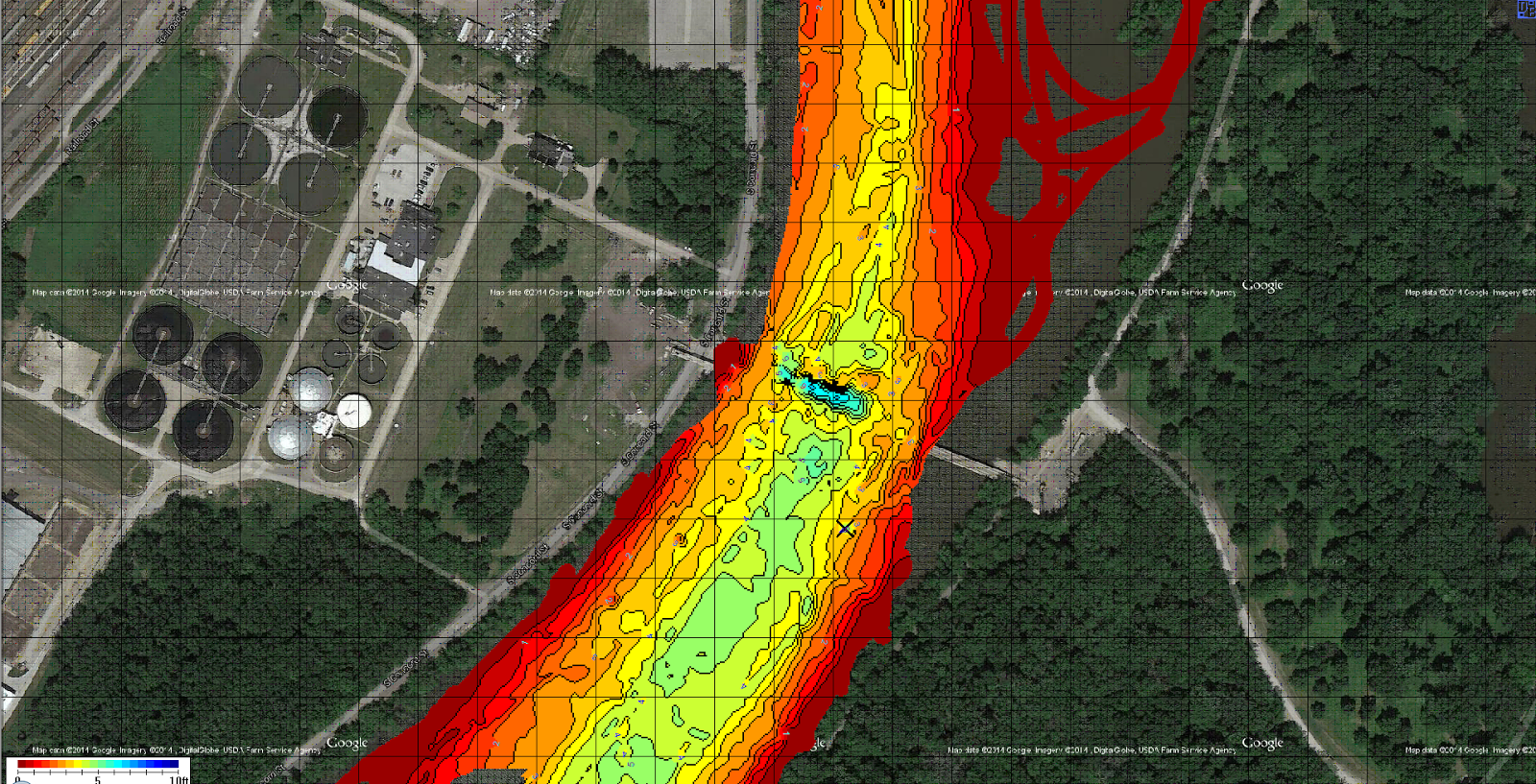 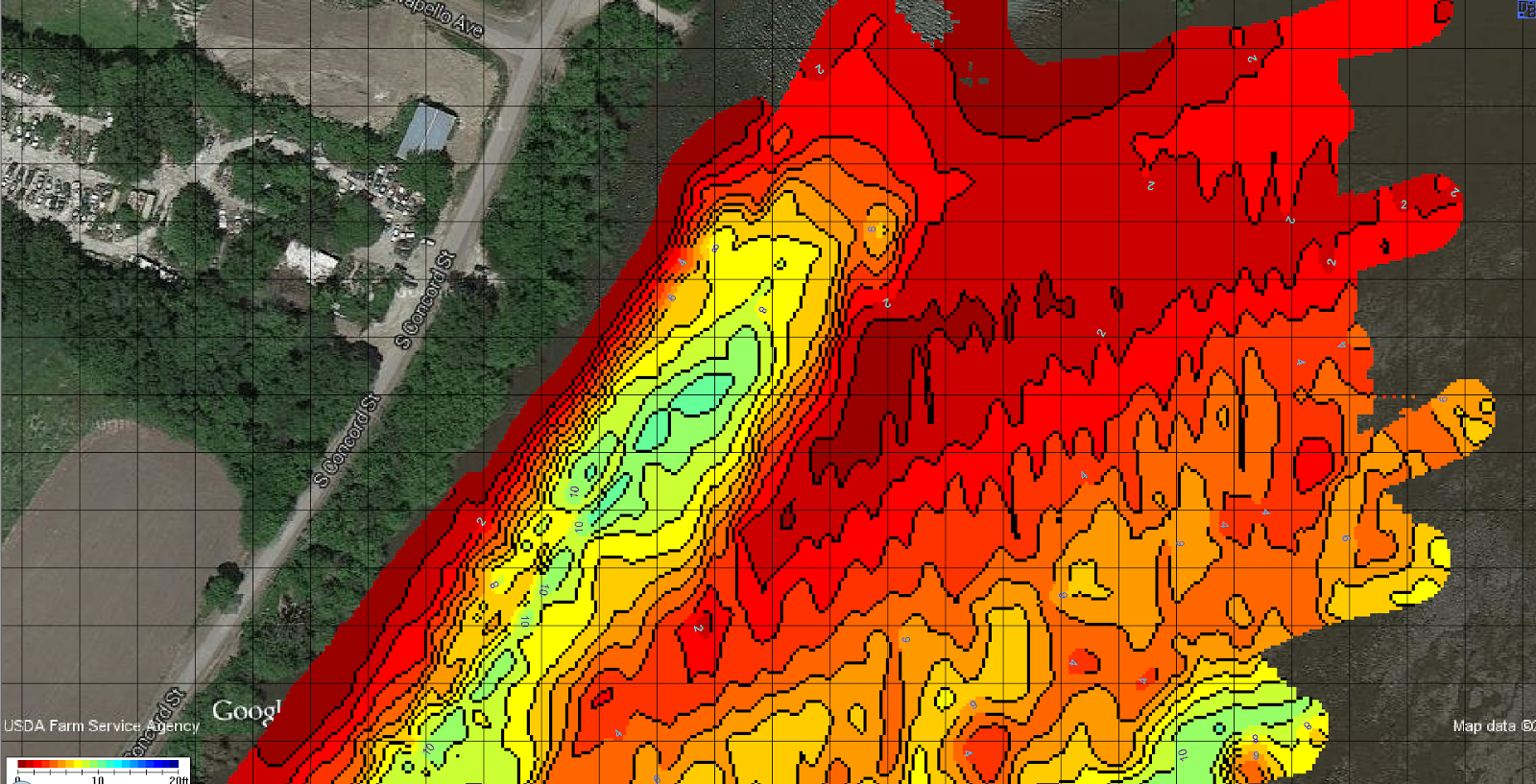 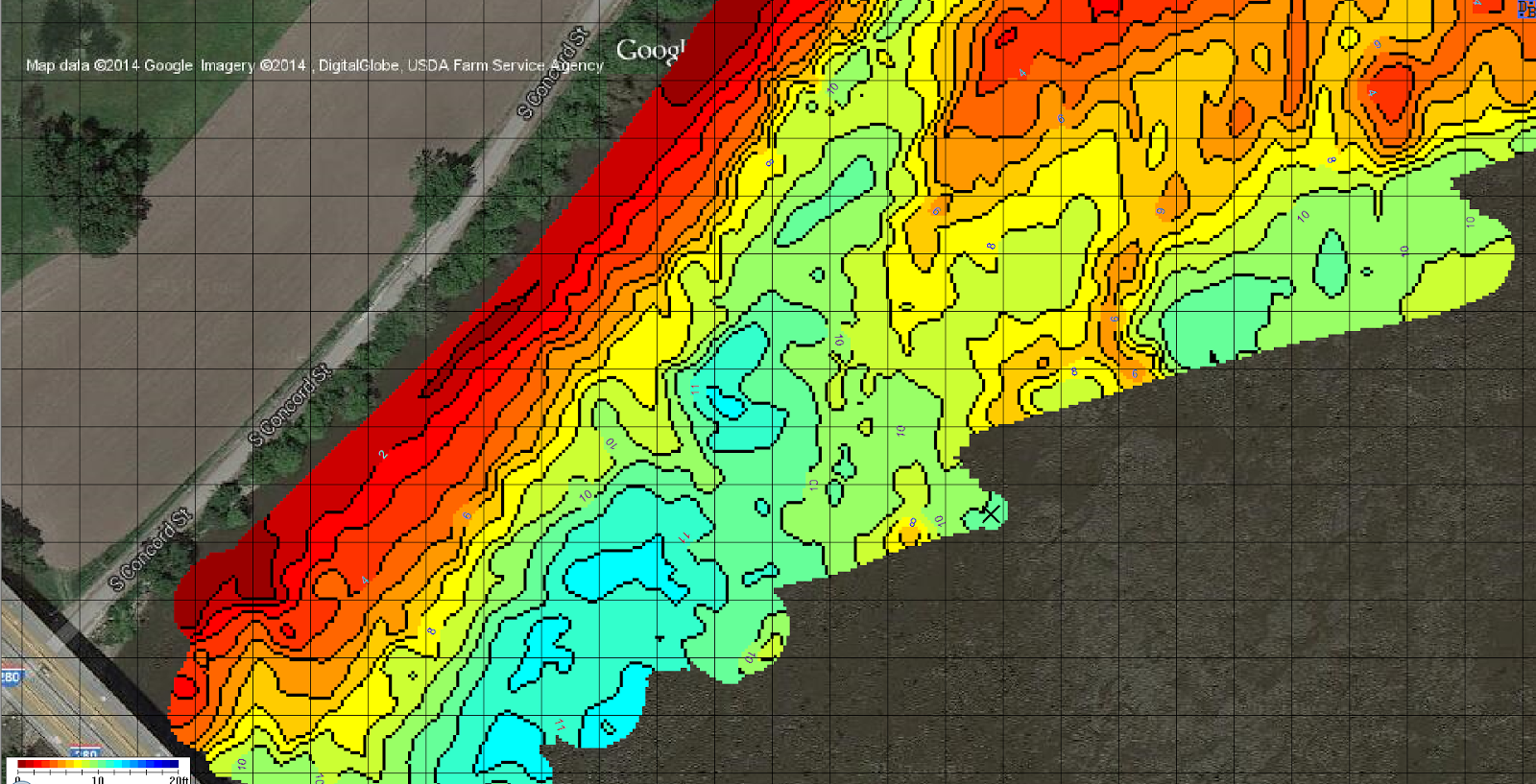 And the same maps in 3D which I use to locate current breaks and seams for catching flathead catfish. I've caught a dozen or so in this area since 2010 between 25 and 37 pounds. It used to be a good spot for channels cats in the yellow and orange areas along the shore which is a gravel and sand bar but has been ruined by people dumping their garbage there because enforcement and fines are so weak it just doesn't stop them. 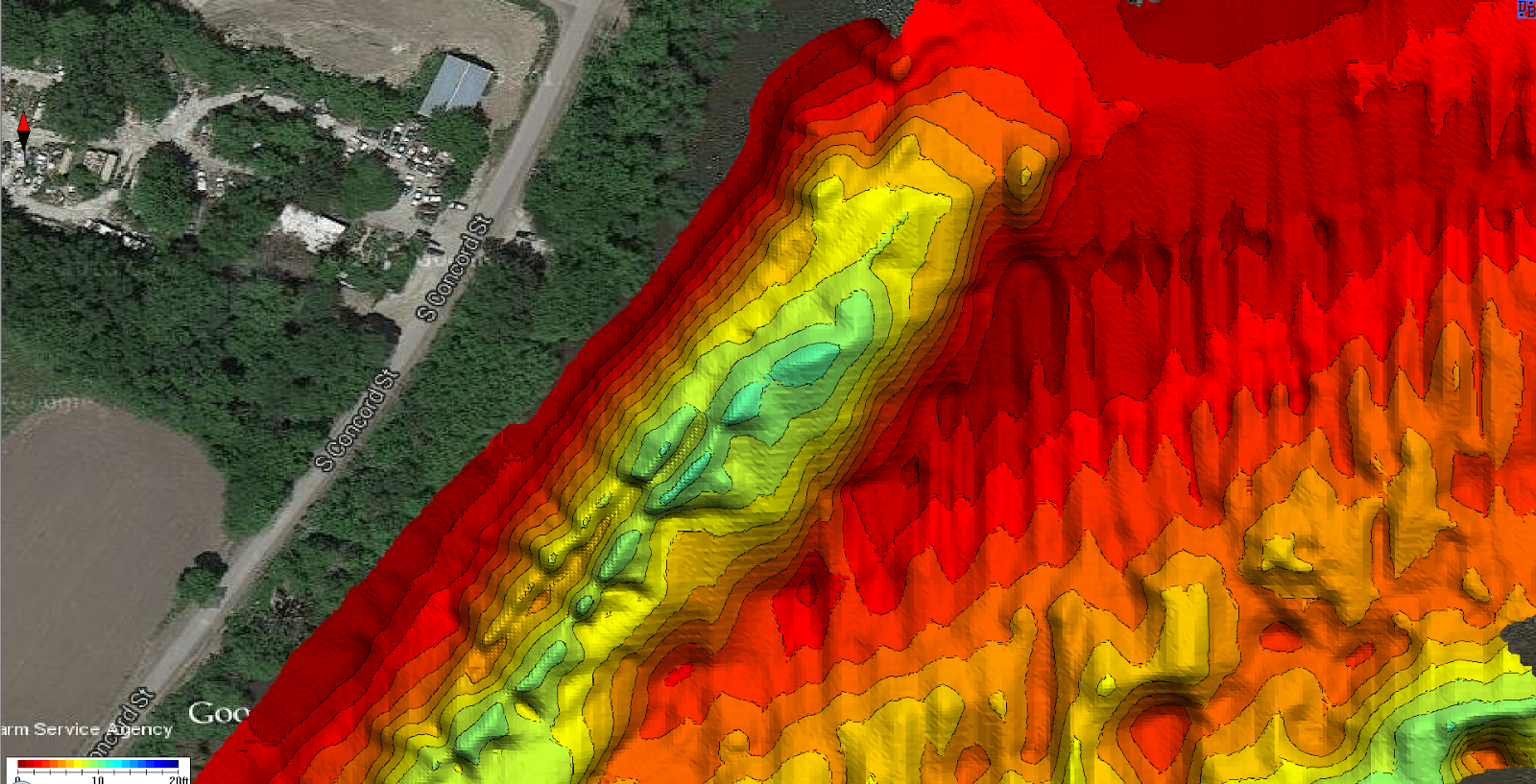 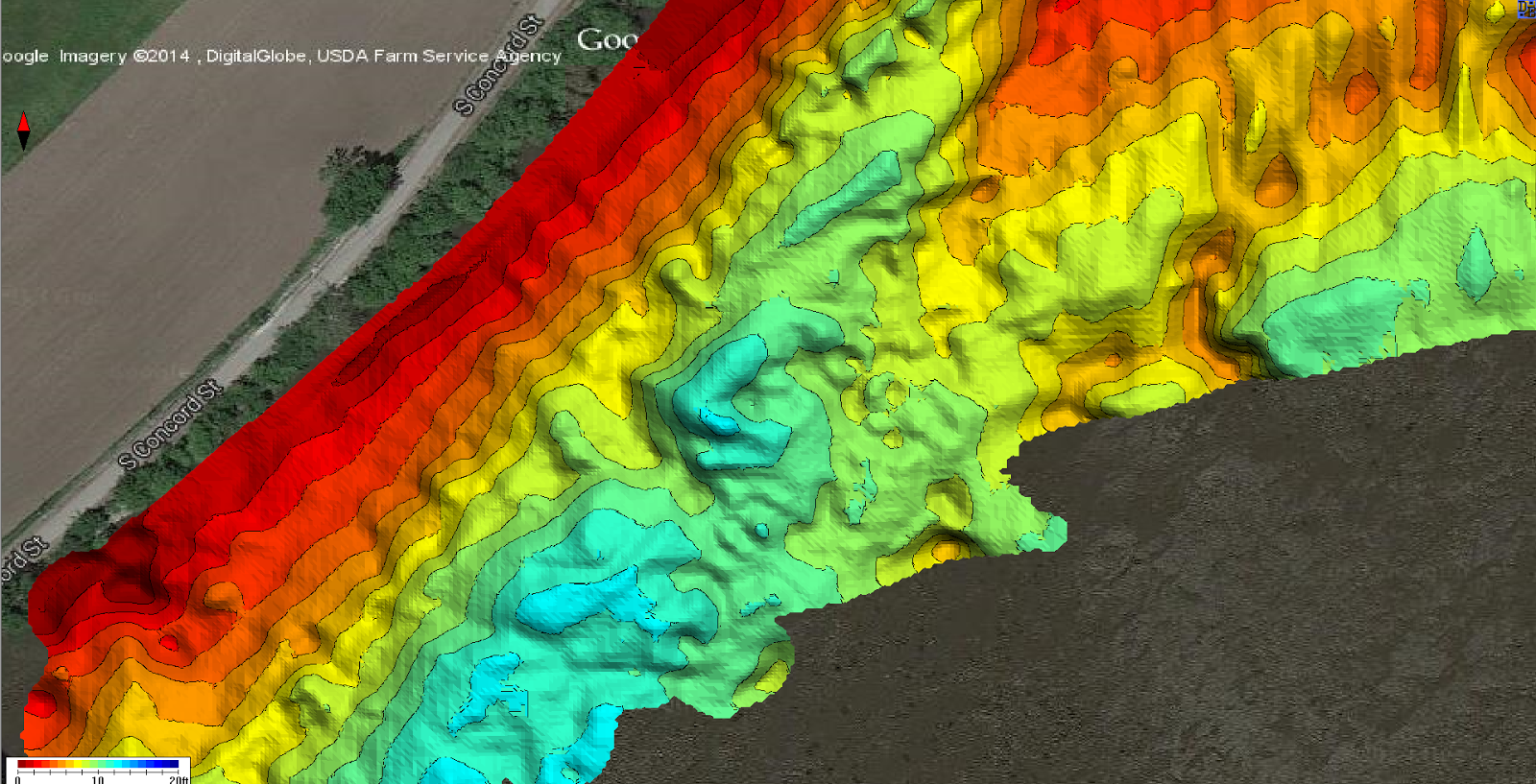 Here are some of the wingdam just below the I-280 bridge. Most of this data is from Walleye Master Fisherman Bruce "Doctor Sonar" Samson. If you want to learn the ins and outs of Lowrance fishfinder and gps mapping devices this is the place you go. 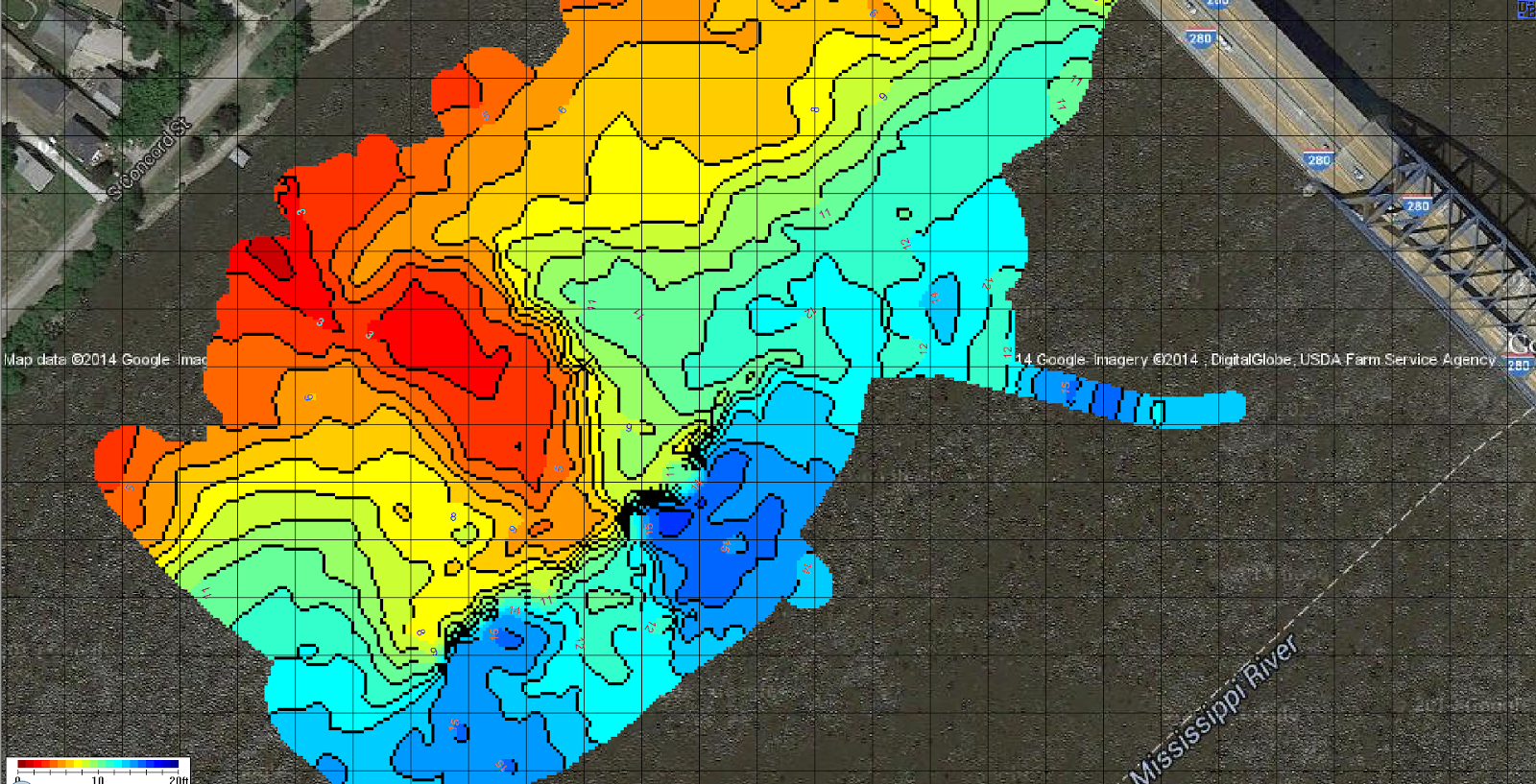 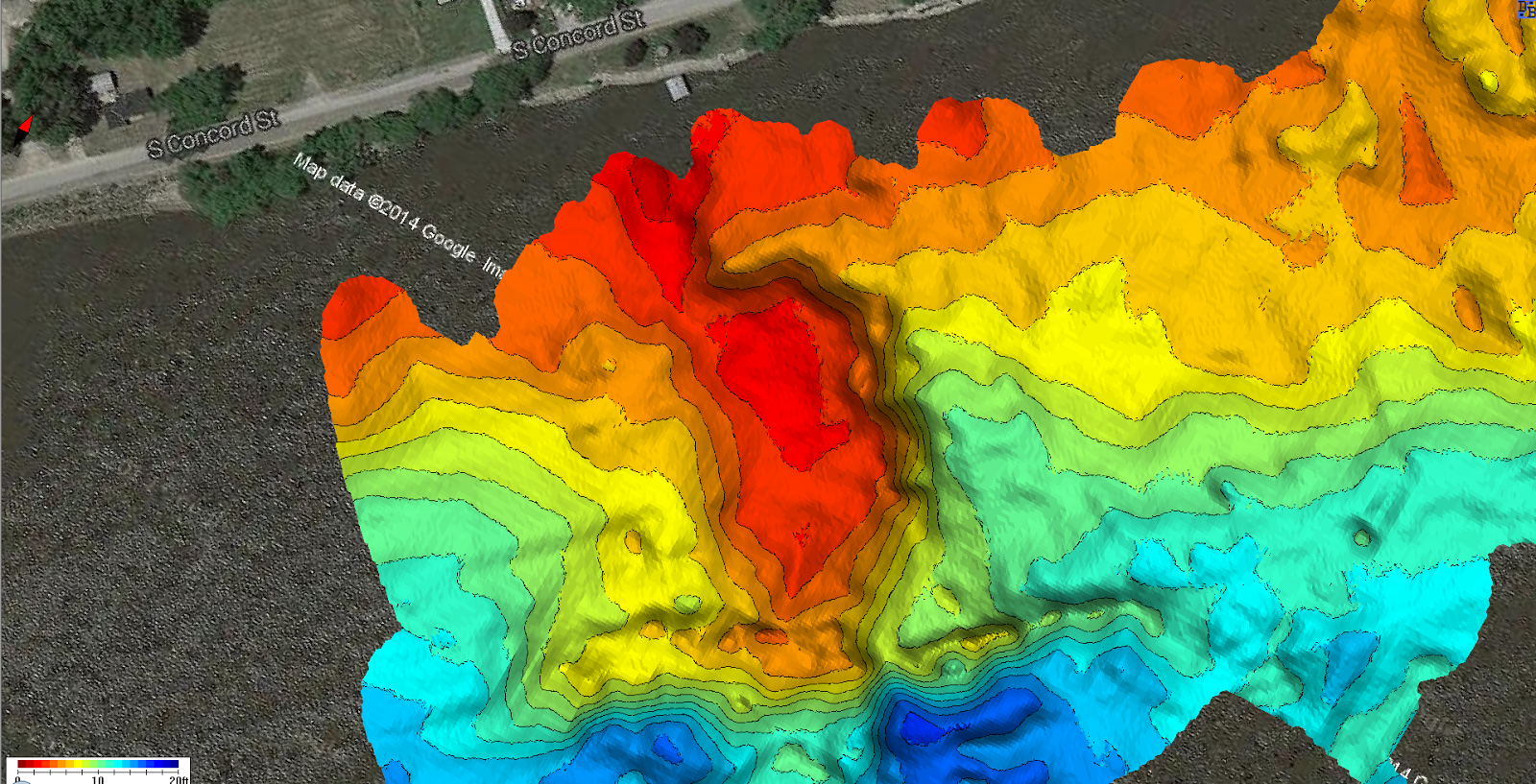 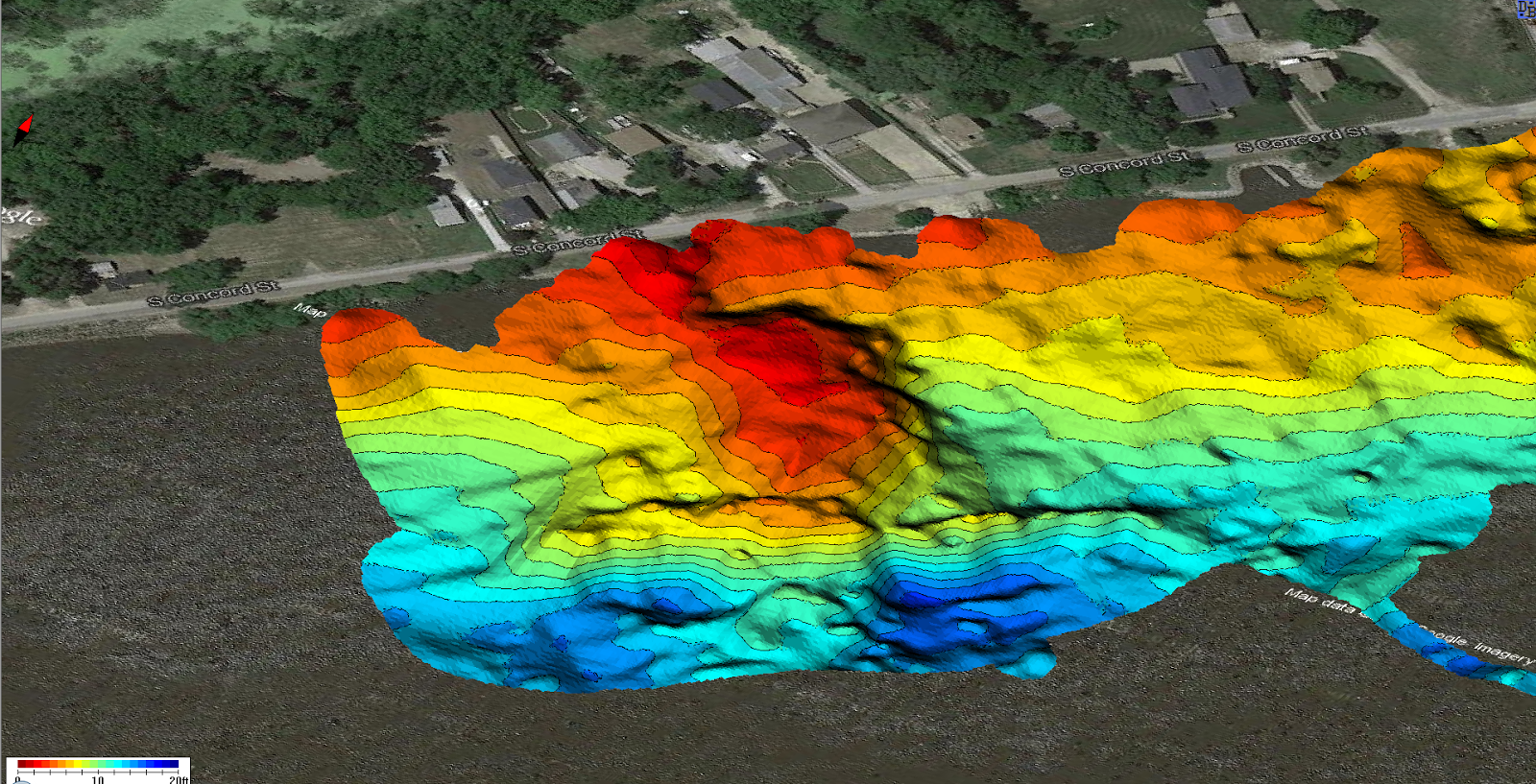 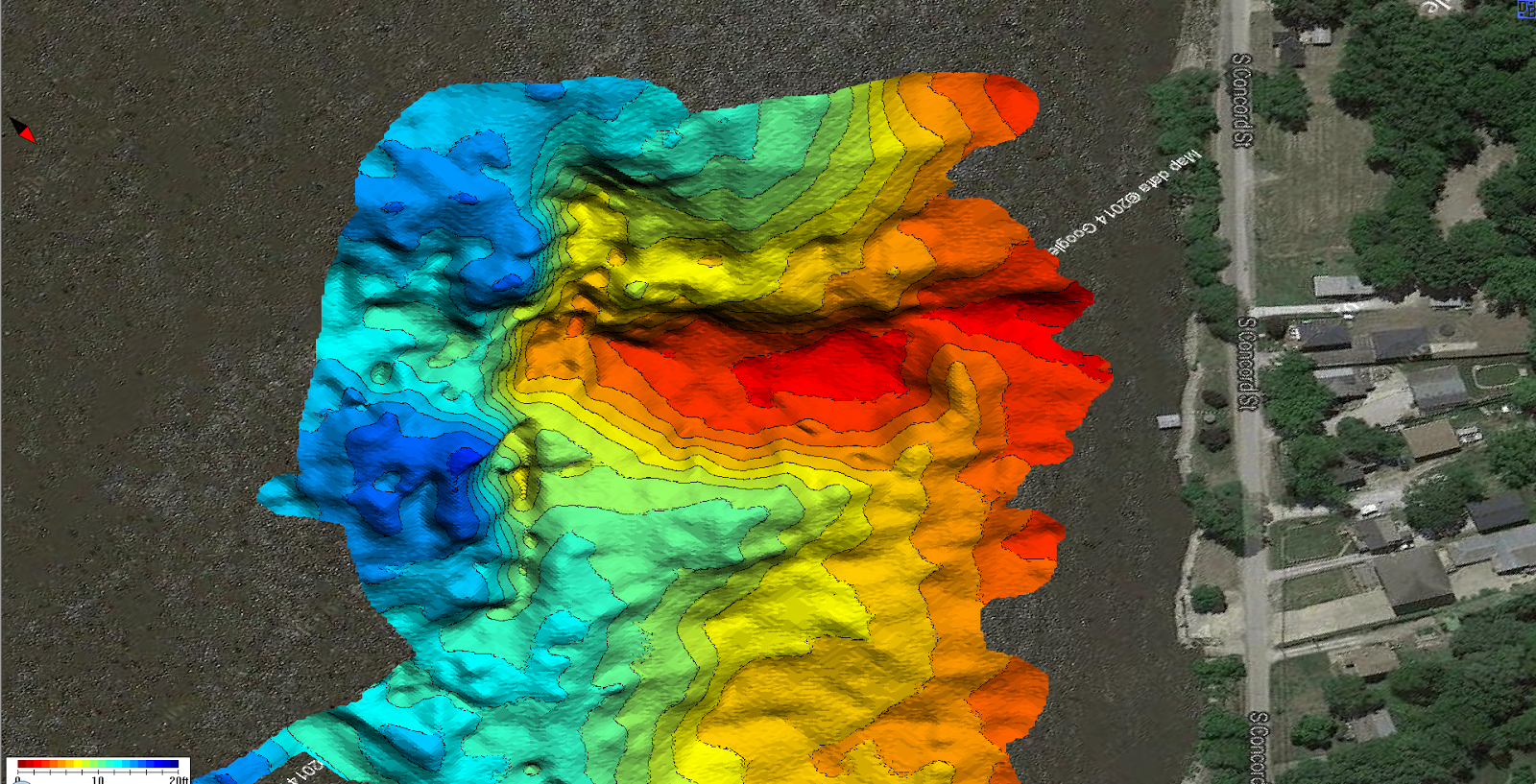 This is a little further downstream just across from Horse (Enchanted) Island. It's a normal wingdam at a right angle to the river and a closing wingdam that goes downstream (left) to another regular wingdam 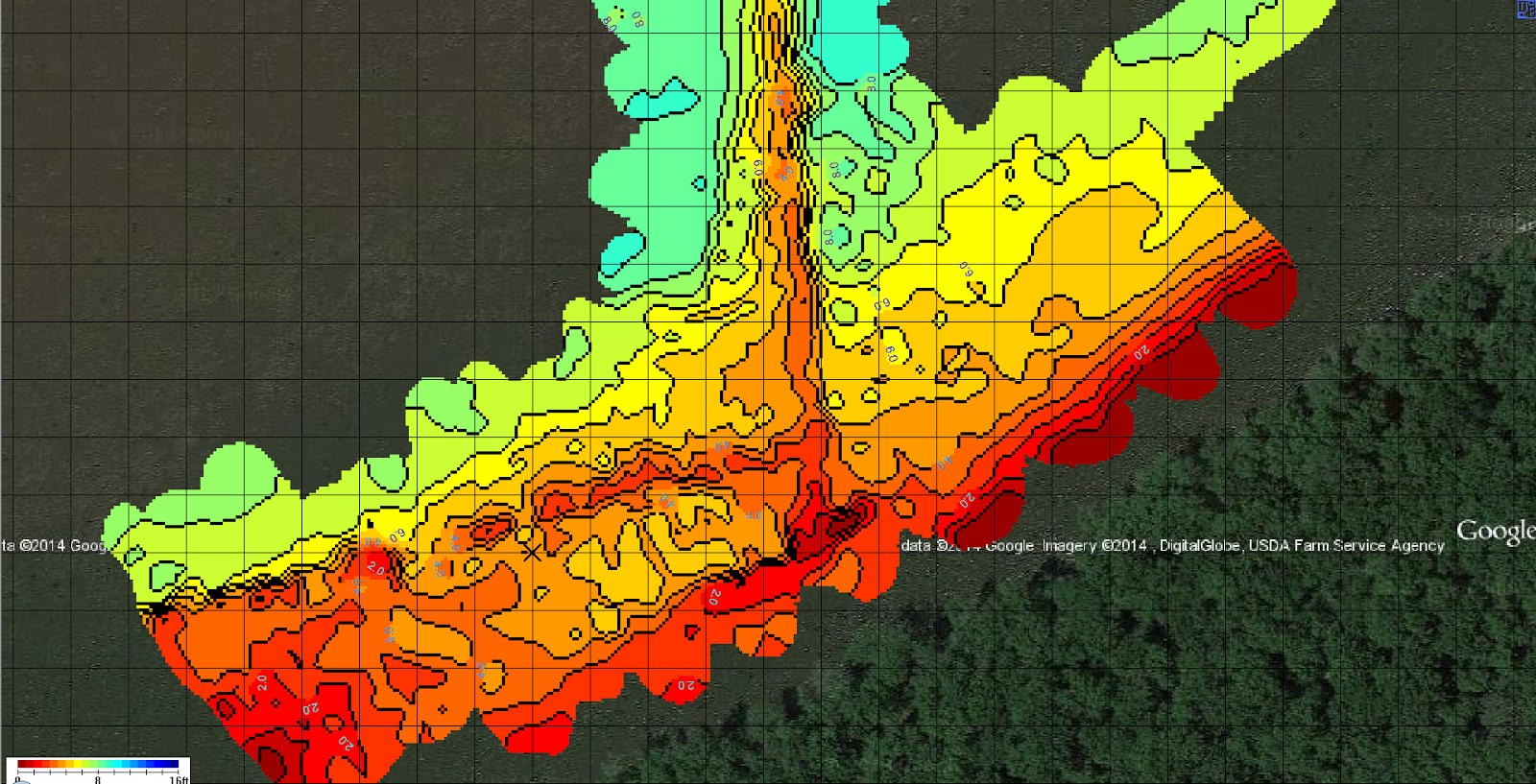 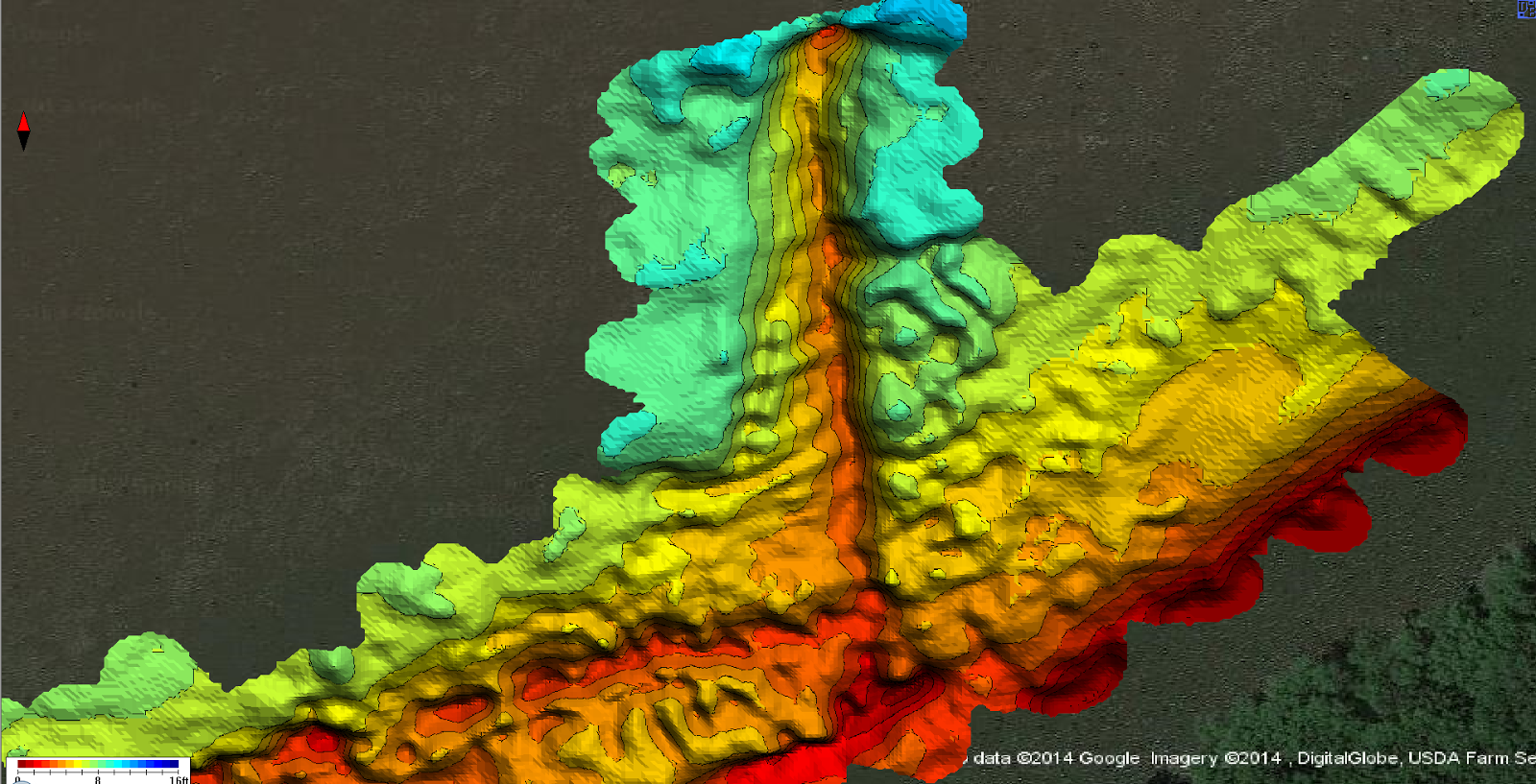 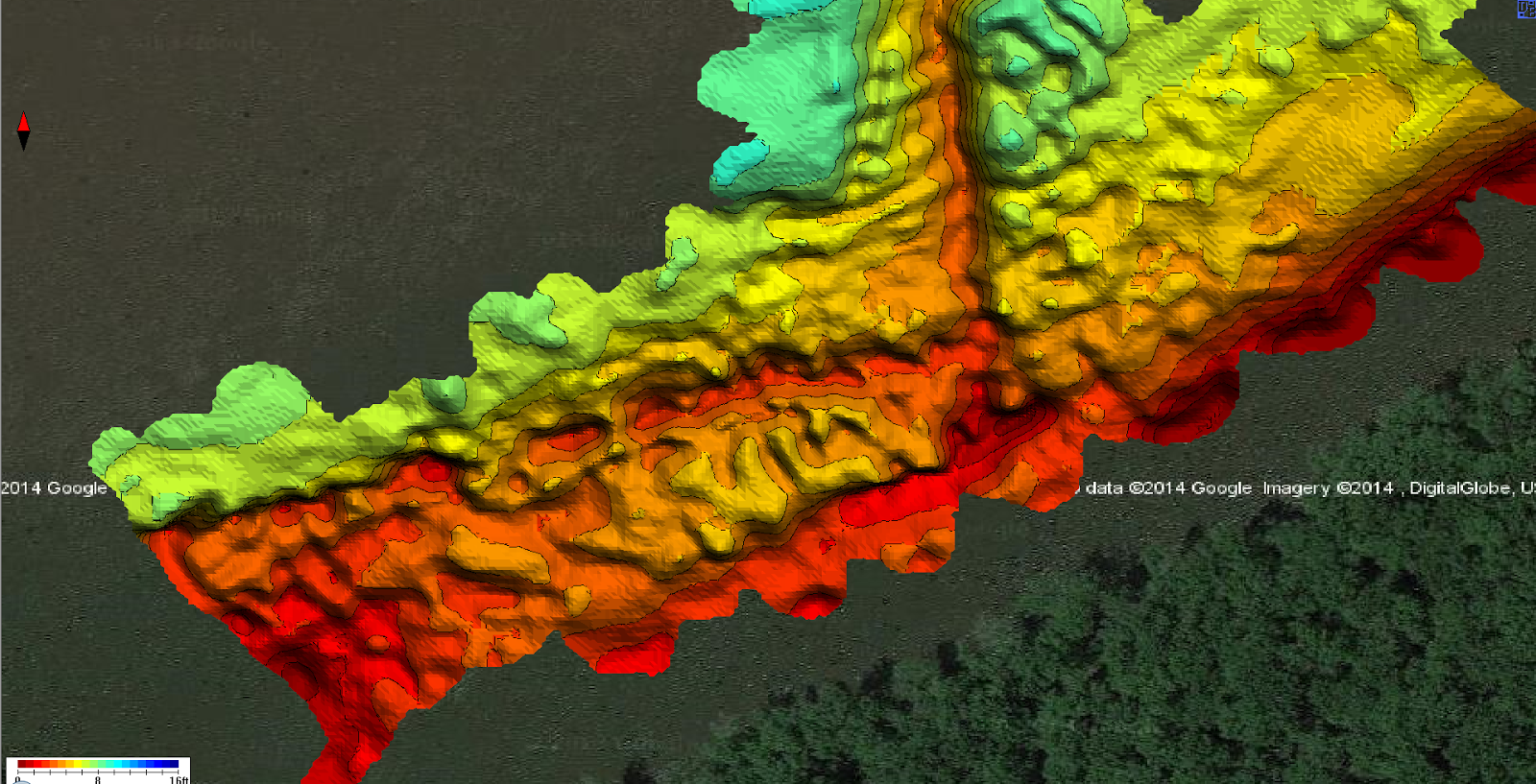 These really don't do justice to these maps when they are used live on the water, I've got some software that records the screen like a movie and I'll try to make so live usage videos this summer. I also have a new toy that I'll introduce in a couple of weeks, basically a WiFi fishfinder that uses an Android or Apple phone or tablet as the screen which I'll be able to get screen shots to embed in the waypoints of my maps. I'm also going to introduce a new project in the next day or two.

This is a project to turn a Netbook into a touchscreen chartplotter with Internet access. Preliminary plans include enabling the internal GPS built into the modem, adding a touchscreen, turning it into a tablet style, adding Bluetooth and adding SMA jacks for external antennas for the 3G internet access and GPS. Other possible plans are adding an internal BroadCom Mini PCI-e HD Decoder and external USB HDTV tuner. Operating system enhancements will be added to take advantage of the touchscreen, in XP this will includes several apps ported over from XP Tablet PC, Vista, and Win7. I may also make a Ubantu Linux based OS